posted in Agile, Lean, Toyota on April 3, 2009 by Sasa Stamenkovic 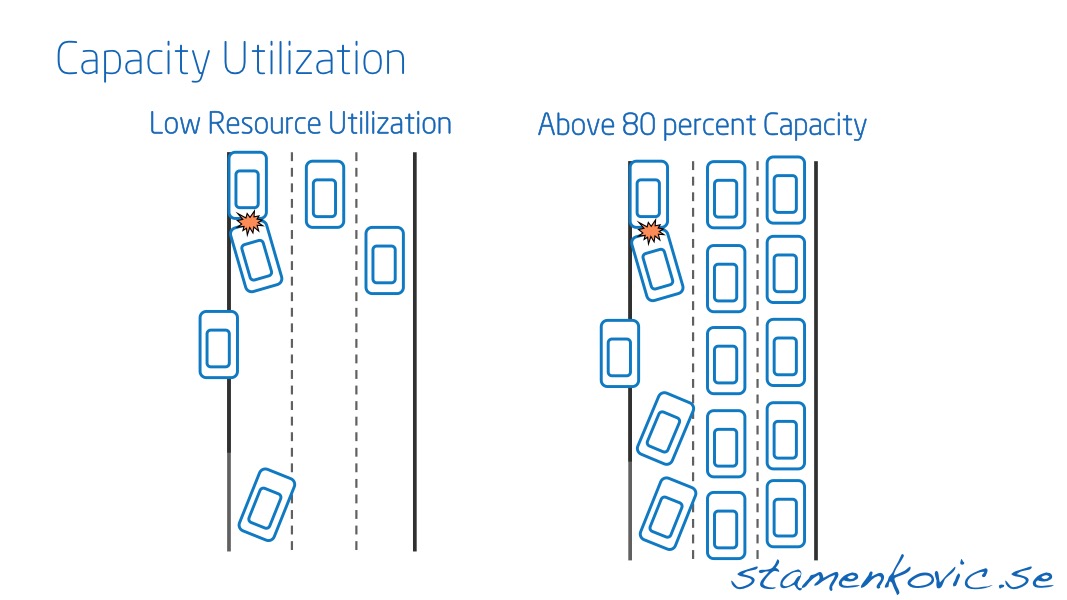 It is important to examine and understand why the seven wastes are so prevalent. It’s mostly because no company truly can understand how to eliminate these wastes until it understands their true root cause. Considering the queuing theory will provide some important insights about the root cause of waste in product development. However, as a reference, traditional product development practices that are particularly problematic include that..

To gain insight into the reasons wastes are generated by this approach you need to view and consider the product development process as a system; where arrivals (requests for work) place demands upon a limited capacity resource – and apply queuing theory – the phenomena of standing, waiting, and serving. Then consider traditional product development practices of the following basics of queuing theory which are well documented and well understood in manufacturing:

Capacity over-utilization has well understood consequences for system performance yet system capacity is seldom even a consideration in product development planning. The queuing curve illustrates the increases in lead time based on changes in system capacity utilization. It begins to increase in a nearly exponential manner at about 80 percent of capacity utilization, meaning that there is a nonlinear relationship between additional system loading and lead-time increases when 80 percent of system capacity has been reached. Product development systems often operate at levels significantly above this level. When these types of variations combine within a system, we get a rapid propagation of variation that is incredibly destructive to system performance. Moreover, if the variability is present early in the process, it will have a magnified effect throughout the process. Thus, any efforts to eliminate this variability on the front end will pay huge dividends. Consequently, managing variability and controlling system capacity is crucial to high levels of product development system performance.

In summary: Companies that continue to view the product development process in the traditional way; as an uncontrollable series of discrete events that just pop up, will always be on the defensive and e forced to deal with variability and capacity issues in a fire drill mode. Toyota never accepts variability problems as necessary or uncontrollable.