posted in Lean, Toyota on March 2, 2011 by Sasa Stamenkovic 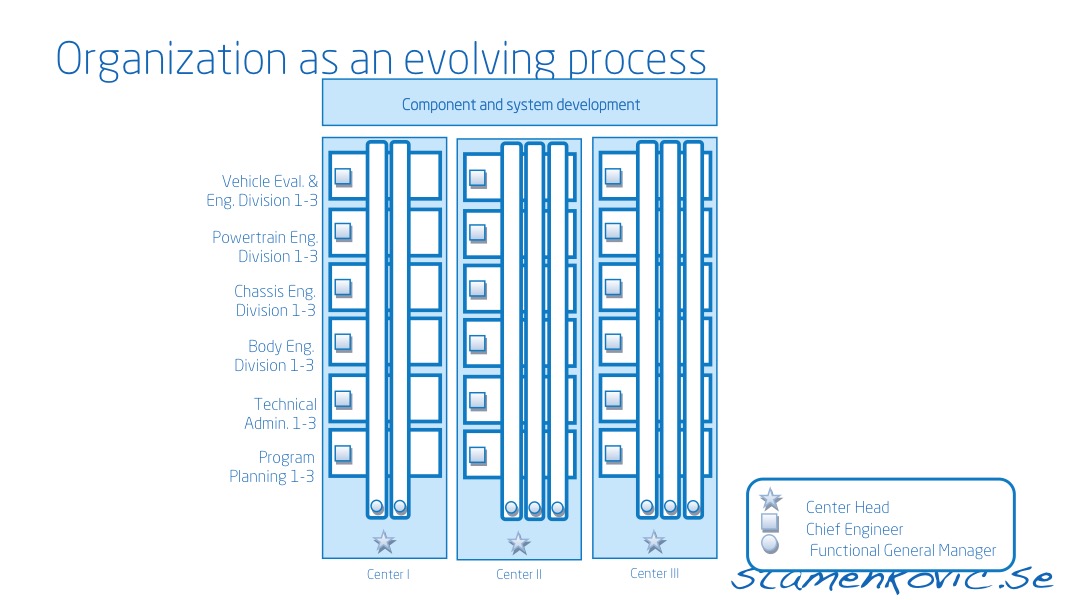 “One result of the Prius development project is something called obeya – big room – where the chief engineer gathers the team of people responsible for that project. That is where simultaneous engineering can be even more effectively implemented by all the key people coming together in this area.”
Takeshi Uchiyamada, first chief engineer of the Prius Hybrid

The functional organization groups like specialties and like-minded professionals into departments. The functional organization had several advantages but there was one big problem with this organizational approach – functional specialists tended to bond and become more wedded to their function and profession than to the company and its products and customers. Their measure of success was how well the functional department performed and how big a budget it garnered. They believed their profession could be the savior of the company; if they ran things, the company would be successful beyond belief. As a result, no function did a particularly good job of working in coordination with the other functions. Today, these isolated functions are often denoted by derogatory terms like functional silos or chimneys.

Shortcomings of a Product Organization

The product organization creates cross-functional teams that focus on a project or product and sets clear goals and objectives for the new PD program, holding the team responsible. Toyota seldom settles anything with compromises and seeing a choice between a functional organization (with its functional expertise and the efficiencies that come with sharing people across programs) or the product organization that integrates systems across functions, Toyota’s view will be, “I want them both.” The secret to Toyota’s success is combining a strong functional organization on deep specialization with the CE system as the other leg of the matrix.

The secret in combining a strong functional organization with a matrix organization and keep the pace between these two structures lies within using a combination of the intense customer focus (the core of the Toyota DNA) and the CE system to make the program management part of the matrix work in harmony with the functions. There are five reasons why the working engineer pays any attention at all to the CE and the specific vehicle program, and how Toyota successfully can integrate the functions and programs:

Toyota’s matrix organization worked just fine for decades, but as Toyota grew and cars became more complex, the functional specialties proliferated. After decades of fine-tuning one type of matrix organizational structure, the company fundamentally reorganized it around three vehicle development centers, each of which handled a different product family of vehicle platforms: rear-wheel drive, front-wheel drive, and utility vehicles/van. It was restructured once more with the Lexus program (Center III was devoted only for Lexus models!).

This is the place where once every two days or so the CE participates in face-to-face meeting with a team of specialist from the various design, evaluation, and manufacturing functional groups. Here, the experts could work with the CE to formulate ideas, address immediate issues, and make on-the-spot decisions. The two main purposes of the Obeya Room are: information gathering and information management.

Further, at this time, Toyota was also developing another simultaneous engineering initiative, which consisted of two main initiatives: 1) the modular development team and 2) a corresponding role to the CE, the chief production engineer. Toyota continued to streamline its product development process (in some cases eliminating physical prototypes and radically reducing tool-manufacturing times), the old interaction between PD engineers and production engineers proved inadequate. It became clear that Toyota’s new, high-velocity product development process required seamless collaboration. Toyota determined that a stronger and more intensive involvement between product engineering and production engineering at a higher level was needed to coordinate the extra complexity and need for speed. It was with this in mind that the company created the module development team (MDT) structure.

Organization as an Evolving Process

The power of lean thinking is emphasizing on a learning organization – always improving on what you have while maintaining a considerable continuity in the process.

Deep functional expertise is a requirement for LPDS but so is coordination across functions to stay focused on the customer first. That is why the matrix organization structure is so popular – it provides an opportunity to balance the functional organization and the product organization. But the matrix in reality is often unbalanced. Either the functional organization is dominant, leading to a bunch of technical specialists across functions that do not talk to each other, or the product organization is dominant, and the company loses depth of expertise and standardization of product features. Toyota strikes the balance by beginning with the development of towering technical competence within functions and then layering on this the CE system to keep functional specialists focused on the customer and the vehicle.