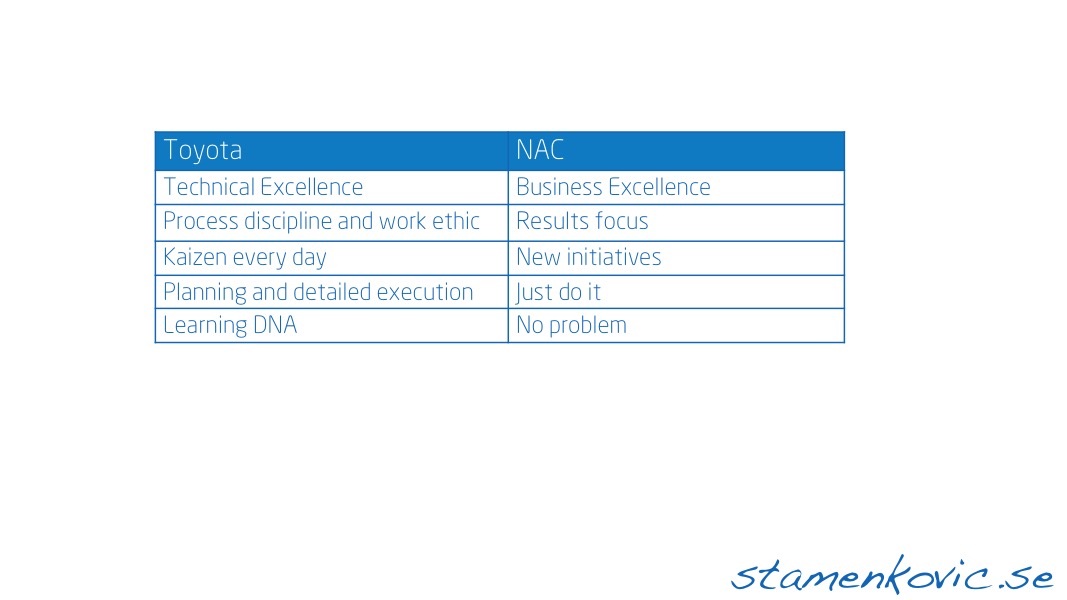 How Culture Can Stand Between You and Lean

The assumption is that if lean has eliminated or reduced waste in manufacturing, it can do the same for product development. Invariably, their organizations expect them to bring back effective waste-bursting tools that will cut lead-time and cost. Of course, it’s not that simple. Comments from companies whose engineers have taken suck courses or have attempted to apply Toyota’s lean PD tools illustrate the problem:

As these examples show, companies cannot simply have their engineers learn and apply these powerful tools and then sit back and watch the waste evaporate. What is missing is a lean culture to sustain the tools. Loosely defined, culture is the soft, imprecise, fuzzy stuff of everyday life. Definition of culture:

“… the pattern of basic assumptions that a given group has invented, discovered, or developed in learning to cope with its problems of external adaptation and internal integration, and that have worked well enough to be considered valid, and, therefore, to be taught to new members as the correct way to perceive, think and feel in relation to those problems.”

An explication of four key concepts in this definition follows:

This broadly-shared cultural DNA is fundamental to the success of lean thinking. Paradoxically, this same cultural DNA is one of the reasons it is a challenge, even within Toyota, to teach the lean product development system to new employees globally. Toyota works hard to bridge differences, and as a result, most Toyota employees do share basic assumptions about values, priorities, and how to get work done.

A Tool Is Not a Solution

Simply buying reams of A3 paper, requiring engineers to write A3 reports, and expecting to get the same result as Toyota will not work. At Toyota, A3 works because it takes place within a particular cultural context. Without a deep thought and consensus-based process, the A3 report is a tool generated for the wrong reasons. In lean thinking, it is the process of producing not the result of producing the A3 that makes it a powerful method.

Technical and Engineering Excellence Are Intertwined in the Culture

At Toyota, formal education is a foundation that is not, in and of itself, useful until employees have been fully acculturated. Toyota’s cultural structure includes the following precepts:

Toyota is a manufacturing company run by engineers. This is important in a lean PD system because it makes the individual engineer the center of that system – all decisions, processes, and ideas germinate from the individual engineer working in teams and reporting up to the chief engineer. What develops during this process is “towering technical competence” that comes from learning by doing from the ground up rather than from technical training exercises that “upgrade” engineers. In combination, these are the elements that make a company a culture of technical excellence that is firmly grounded in technical mastery, both in product development and manufacturing.

At Toyota, one common denominator aligns everyone to the same goal.

The answer to all these questions is the same. It is customers come first.

The Culture Supports the Process

Many automakers would like to adopt Toyota’s lean PD process, but many have tried and encountered large disappointments. The main reason companies have so much difficulty adopting and sustaining these simple, common sense principles is culture. The figure below compares the cultures of Toyota and NAC. A quick glance shows how diametrically opposed Toyota and NAC are on every critical dimension. NAC is business driven company, meeting expectations from quarterly profits for Wall Street is the highest objective, so it has a finance-dominated culture. Technical excellence is secondary because NAC is about getting bottom line results in any way at any cost. Where Toyota reveres technical excellence and invests heavily in the development of its people, many NAC executives are fond of saying that “costs walk in on two legs” and focus efforts on people reduction, even if this may lead to losing core competencies. Toyota is about the process. Follow the right process and you will get the desired results. NAC is often motivated by the latest, cutting-edge initiatives and technologies that can make work easier and faster – shortening the line between two points. Forget about the daily mundane activities, like detailed engineering, or building cars that are not exciting. In contrast, Toyota is about continuously improving mundane processes. Engaging in detailed planning to an almost compulsive degree is the norm at Toyota. NAC’s result orientation leads to a “just do it” mentality, without any effort to capture any learning to leverage for the next program. Toyota is all about learning, program to program, engineer to engineer.

Given the culture at NAC (and similar companies), it is no real wonder that implementing and sustaining Toyota-like development processes can be nearly impossible. Three examples of what tends to happen are presented below.

Chief Engineering System. You develop a chief engineer system to integrate development from start to finish. That is, the chief engineer drives the entire product development system – this is a foundation of the lean PD system. Several traditional auto companies recognized this and ordered that their company create chief engineers. This, of course, raises at least three questions: Will the new CEs have the technical expertise and organizational respect to get the job done? Will functional bosses assign the right people to programs at the right time? Will people who are evaluated by their functional bosses and also report to a chief engineer on a program follow the instructions of one or the other? It’s not surprising that the failure rate of these “instant CEs” was quite high at all of these companies.

Front-load. Front-load the product development process to thoroughly explore alternative solutions while there is maximum design space. By front-loading, you anticipate and solve problems before tools are even designed and before any capital investment. Toyota uses a kentou phase to do this. Will the kentou phase be taken seriously? Wil engineering managers assign the best engineers to work on the kentou phase? Will engineers have the time, know-how, or discipline to work through each and every drawing, root out possible problems, and put in countermeasures? Will they overcome functional boundaries and turf mentality to work collaboratively across functional organizations? In a “just do it” hurry-up culture, will broad circulation of the kentou lead to deep reflection on each detailed design feature? The global answer is “not likely”.

Level the workload. Create a leveled product development process, leveling the workload depends upon flexible staffing as the program proceeds. At peak points in the program you need to pick engineers anad technicians from flexible pools and from suppliers. Can the company flexibly recruit engineers who will seamlessly contribute to the engineering process? Will this pool of engineers be properly trained in the “NAC Way” to understand the design process and design philosophy? Will engineers from this pool speak the same language as full-time career employees? Will they be as motivated as NAC engineers to contribute to the common goal of putting the customer first? Again, not likely.

Within the Toyota system, leaders serve as the bearers of the Toyota culture and exemplify the culture in their daily behavior. It can certainly be tedious to follow the right process day in and out. No Toyota leader has ever assumed that lean sustains itself. On the contrary, the company’s leaders intuitively understand that the natural evolution of a culture will atrophy and deteriorate unless its leaders are continually renewing and passing the DNA to others.

Build a culture to support excellence and relentless improvement

Lean tools will not be effective unless used in a supportive culture. Culture is the way work is done and the way people think about the work and products. Some of the core cultural values that support lean product development are genchi genbutsu, set-based thinking, hansei, and putting the customer first. This broadly-shared cultural DNA is fundamental to the success of lean thinking and a further reason why it is a challenge, even within Toyota, to teach the lean product development system to new employees globally. Key characteristics of Toyota’s high performance culture, which should be used within your own organization, include the following: