posted in Leadership, Motivation, Team on May 25, 2012 by Sasa Stamenkovic 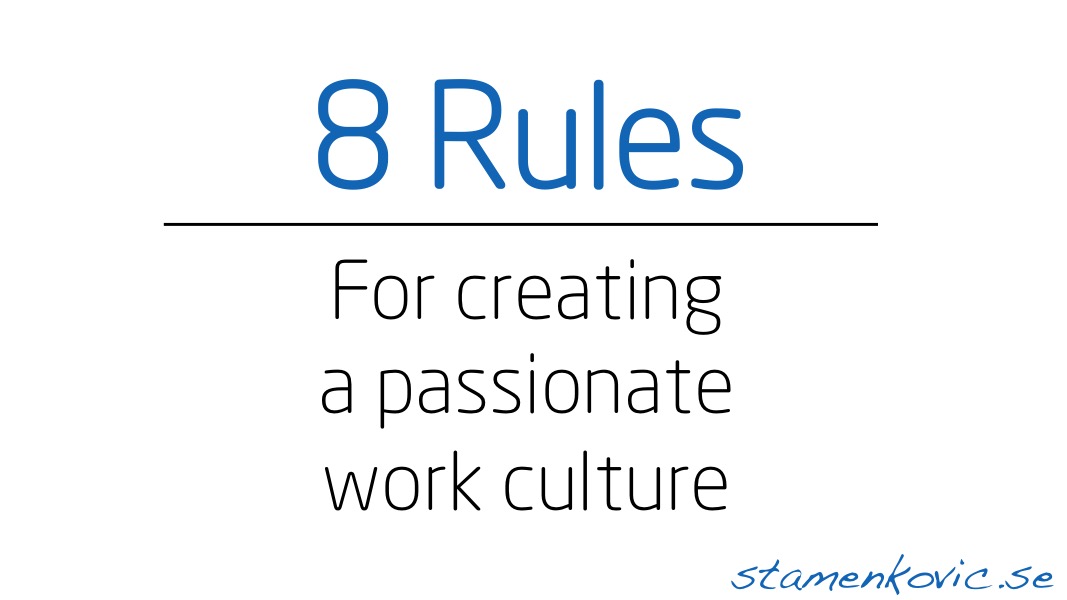 For the long-term viability of any enterprise you needed a viable corporate culture. It, too, has to be long-term. So, cultivate good people and keep them. Work with honest and competent business managers and give them a long-term commitment and support. From these modest principles, an empire can rise.

Here are eight rules for creating the right conditions for a culture that reflects your creed:

Hire for passion and commitment first, experience second, and credentials third. There is no shortage of impressive CVs out there, but you should try to find people who are interested in the same things you are. You don’t want to be simply a stepping stone on an employee’s journey toward his or her own (very different) passion. Asking the right questions is key: What do you love about your chosen career? What inspires you? What courses in school did you dread? You want to get a sense of what the potential employee believes.

Once you have the right people, you need to sit down regularly with them and discuss what is going well and what isn’t. It’s critical to take note of your victories, but it’s just as important to analyze your losses. A fertile culture is one that recognizes when things don’t work and adjusts to rectify the problem. As well, people need to feel safe and trusted, to understand that they can speak freely without fear of repercussion.
The art of communication tends to put the stress on talking, but listening is equally important. Great cultures grow around people who listen, not just to each other or to their clients and stakeholders. It’s also important to listen to what’s happening outside your walls. What is the market saying? What is the zeitgeist? What developments, trends, and calamities are going on?

3. Tend to the weeds

A culture of passion capital can be compromised by the wrong people. One of the most destructive corporate weeds is the whiner. Whiners aren’t necessarily public with their complaints. They don’t stand up in meetings and articulate everything they think is wrong with the company. Instead, they move through the organization, speaking privately, sowing doubt, strangling passion. Sometimes this is simply the nature of the beast: they whined at their last job and will whine at the next. Sometimes these people simply aren’t a good fit. Your passion isn’t theirs. Constructive criticism is healthy, but relentless complaining is toxic. Identify these people and replace them.

To obtain passion capital requires a work ethic. It’s easy to do what you love. In the global economy we can measure who has a superior work ethic, who is leading in productivity. Not many industries these days thrive on a forty-hour work week. A culture where everyone understands that long hours are sometimes required will work if this sacrifice is recognized and rewarded.

“Make no little plans: they have no magic to stir men’s blood.” These words were uttered by Daniel Burnham, the Chicago architect whose vision recreated the city after the great fire of 1871. The result of his ambition is an extraordinary American city that still has the magic to stir men’s blood. Ambition is sometimes seen as a negative these days, but without it we would stagnate. You need a culture that supports big steps and powerful beliefs. You can see these qualities in cities that have transformed themselves. Cities are the most visible examples of successful and failed cultures. Bilbao and Barcelona did so and became the envy of the world and prime tourist destinations. Pittsburgh reinvented itself when the steel industry withered. But Detroit wasn’t able to do the same when the auto industry took a dive.

When choosing students for a program, most universities consider more than just marks. If you had a dozen straight-A students who were from the same socio-economic background and the same geographical area, you might not get much in the way of interesting debate or interaction. Great cultures are built on a diversity of background, experience, and interests. These differences generate energy, which is critical to any enterprise.

Years ago, scientists working in laboratories were often in underground bunkers and rarely saw their colleagues; secrecy was prized. Now innovation is prized. In cutting-edge research and academic buildings, architects try to promote as much interaction as possible. They design spaces where people from different disciplines will come together, whether in workspace or in common leisure space. Their reasoning is simple: it is this interaction that helps breed revolutionary ideas. Creative and engineering chat over coffee. HR and marketing bump into one another in the fitness center. Culture is made in the physical space. Look at your space and ask, “Does it promote interaction and connectivity?”

If your culture is dependent on this quarter’s earnings or this month’s sales targets, then it is handicapped by short-term thinking. Passion capitalists take the long view. We tend to overestimate what we can do in a year, but underestimate what we can do in five years. The culture needs to look ahead, not just in months but in years and even decades.
The writer Arthur Koestler said that a writer’s ambition should be to trade a hundred contemporary readers for ten readers in ten years’ time and for one reader in a hundred years’ time. Lasting influence is better than a burst of fame. Keep an eye on the long view.

Source: Excerpted from Passion Capital: The World’s Most Valuable Asset © 2012 by Paul Alofs. Published by Signal, a division of Random House of Canada Limited. Reproduced by arrangement with the Publisher. All rights reserved.